To Be Moved Again! 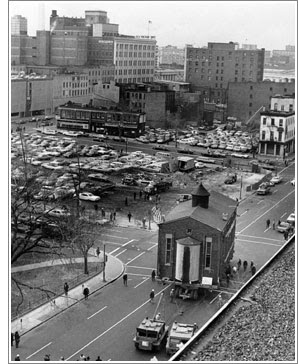 Washington, D.C.'s oldest Jewish Synagogue moved several blocks in 1969 to accommodate WMATA subway construction
and placed next to I-395

From the Triangle [near I-395] not just parking lots anymore:

Louis Dreyfus Property Group presented an update on their I-395 air rights project at both the ANC6C Planning, Zoning and Environment (PZ&E) committee meeting and the full commission meeting this February.

Si Kailian attended the PZ&E meeting and provided a recap on the MVSNA blog.

(Dreyfus) submitted the PUD application for the first phase of development at the end of the year and will now be going through the process of scheduling the official ANC and Zoning hearings as well as working with the Federal Highway Authority on the project. It's an exciting development, planned to be LEED Platinum certified and will add commercial, retail, residential, and green space to what is now the I-395 cavern.

I did not attend the PZ&E meeting, but did see the presentation at the full ANC6C commission meeting. Below is what I sketched translated to a Google satellite image. This is an approximation not exact - PLEASE DON'T TAKE IT TOO SERIOUSLY.

Click to enlarge; Blue=commercial, Red=Residential, Dark Green=relocated buildings
Some points I picked up during the presentation:
Labels: I-395, Louis Dreyfus
Posted by fourthandeye at 18:00 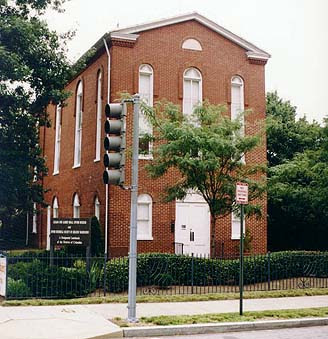 Lillian and Albert Small Jewish Museum, housed in the historic Adas Israel Synagogue, listed on the National Register of Historic Places as the oldest surviving synagogue in the District of Columbia. The synagogue was built by German Jewish immigrants who broke off from Washington Hebrew Congregation, and President Ulysses S. Grant attended its dedication in 1876 at the invitation of Simon Wolf. The historic synagogue was originally located at 6th and G Streets. 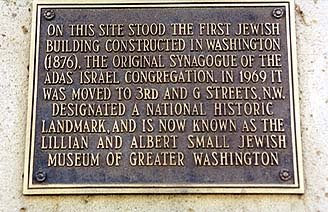 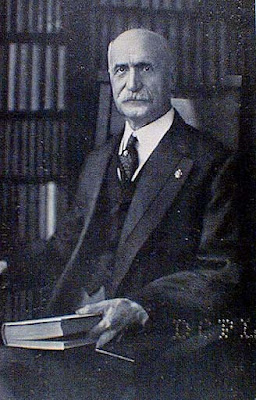 Simon Wolf (1836-1923), lawyer, statesman and prominent member of Washington's German-American community, was born in Hinzweiler, then and now a very small village (current population: 460) northwest of Kaiserslautern in today's German state of Rhineland-Palatinate. In the period after 1815, the Palatinate was administratively, but not culturally part of Bavaria. He emigrated to the United States as a boy in 1848 and settled in Uhrichsville, Ohio. He was admitted to the Ohio Bar in 1861 and came to Washington the following year, where he spent most of the rest of his life.

A friend of presidents from Abraham Lincoln to Woodrow Wilson, Wolf was named Consul and Agent Diplomatique to Egypt in 1881 and was at other times in his life Recorder of Deeds for the District of Columbia and a member of Washington's Board of Charities and Board of Education. He was a prominent member of Washington Hebrew Congregation and was known as a spokesman for Jewish causes in Washington.

As a friend of President Grant's, he was responsible for convincing Grant to attend the dedication of the historic Adas Israel Synagogue (now the Lillian and Albert Small Jewish Museum) as well as for convincing President McKinley to attend the ground-breaking ceremonies for the Washington Hebrew Congregation's building on 8th Street (now Greater New Hope Baptist Church). He was also a member of the Sängerbund and other German-American organizations. 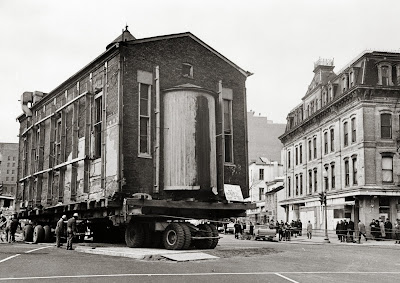 A day away: Small museum has big role in D.C.'s Jewish history

Washington, D.C. - It is a small museum. In fact, it is the Small Museum. More specifically, it is the Lillian & Albert Small Jewish Museum.

Even more precisely, it is the Adas Israel synagogue in Washington, D.C.

Described as a brick structure of "stripped-down Romanesque Revival," the small (60 by 25 feet) building looms large in the growth of the capital's Jewish community.

The first Jewish congregation there met in 1852. That Washington Hebrew Congregation eschewed many orthodox rituals and, in 1869, 17 members broke away to form their own congregation that would maintain a stricter adherence to Jewish traditions. They chose the name "Adas Israel" and eventually built their own house of worship that was dedicated on June 9, 1876. Among those in attendance was President Ulysses S. Grant.

It is said that the second-floor sanctuary could hold 350 people, while the first floor contained a meeting room, classroom and the caretaker's apartment.

The original building spent the first half of the 20th century as a Christian church, a barbershop, bike shop, grocery and deli, and a dentist's office.

In 1966, the story of that first Adas Israel synagogue took an amazing turn, literally and figuratively.

The building was in sad shape and the city ordered it to be demolished. The Jewish Historical Society, the city and the U.S. Department of Housing and Urban Development came to terms and it was determined that the structure could be saved if it was moved.

In December 1969, the second floor sanctuary and third floor balcony were detached from an unfit-for-travel first level, loaded onto a flatbed truck and transported to its present site.

Those upper stories were placed upon a first level that was re-created from bricks salvaged from the 1876 structure.

As much of the expense was borne by an endowment from the Small family, the resulting museum was named in their honor.

The museum was administered by the Jewish Historical Society of Greater Washington, which also maintained its offices in the former synagogue. In May 2008, those offices and archives were moved into larger quarters a block away.

The society has put together an exhibition that contributes to the nationwide observance of the 250th anniversary of Abraham Lincoln's birth, "Jewish Life in Mr. Lincoln's City."

The exhibit includes items from the Jewish Historical Society's collections and images from the Library of Congress and other collections. It opens at the Washington Hebrew Congregation, 3935 Macomb St., NW, on Feb. 13 and will move to the Small Jewish Museum where it will be on view from June 9 through September. 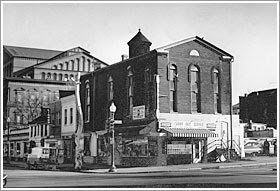 First Floor. After Adas Israel vacated the building (shown here during the period that it was used as a barbeque restaurant), it was reconfigured for commercial use. But the addition of storefront windows and doors weakened the first floor, so in 1969 that floor was left behind because it was not strong enough to survive the move to Third and G Streets, NW. Masons working on a replacement foundation at the Third and G site salvaged as many bricks as possible from the original location.


Posted by Douglas Andrew Willinger at 8:27 PM No comments: